This past spring, we opened a new exhibit called Facing the Allosaurus, and it has become a very popular exhibit, especially with the many children who have come as a result of our Kids Free in 2014 promotion. But our Lucy exhibit still remains a favorite of many of our guests, and for good reason! 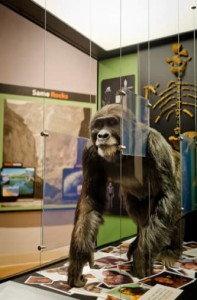 If you were to look up Lucy on Wikipedia, you would read about the “3.2 million-year-old skeletal remains of our bipedal, upright-walking ancestor,” and you would see at least three pictures of exhibits with her in an upright position. You would also read that she probably had flat feet, which is interesting since no bones of her feet were found. But at the Creation Museum, our designers, using the latest in holographic technology, have created a state-of-the-art exhibit to expose the scientific bankruptcy of the evolutionary interpretation of Lucy. In a highly visual way, the exhibit persuasively shows that the fossil bones of Lucy belong to a knuckle-walking, ape-like creature. Staff member Dr. David Menton (PhD, biology, Brown University) wanted to show museum guests, once and for all, that this knuckle-walking creature needs to be discarded as a “missing link” in human evolution. He has also produced an excellent DVD called, Lucy—She’s No Lady!, which can be purchased at our bookstore or online.

Have you had your fill of evolutionary teaching? Come and explore the Creation Museum, where you will enjoy learning from a Christian worldview!