The Northern Kentucky Convention and Visitors Bureau (NKYCVB) last night awarded the Creation Museum the “Star of Tourism” award, its top annual honor, recognizing the museum’s contribution in attracting visitors to the region. 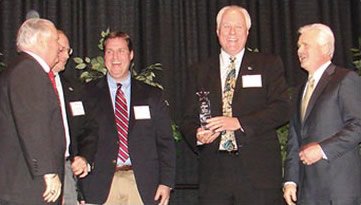 Tom Caradonio, left, president of the NKYCVB, presents the Star of Tourism award to Creation Museum representatives, from left: Dan Mangus, Director of Operations for the Creation Museum; Jason Goff, Sales and Promotions Manager for the museum; and Mark Looy, museum/AiG CCO. Gordon L. Snyder, right, Chairman of the Board of COmmissions for the NKYCVB, assisted with the presentations.

Museum co-founder and CCO Mark Looy was on hand at the Bureau’s 2009 Annual Meeting to accept the award on behalf of the museum. “We are honored to be recognized with this award, and are grateful for the opportunity to have such a positive impact in our community,” Looy said.

Tom Caradonio, president and CEO of the Northern Kentucky Convention and Visitors Bureau (NKYCVB), paid tribute to the museum’s unique achievement in increasing local tourism. “The Bureau’s Star of Tourism Award is meant to recognize individuals and attractions who have made a significant positive impact on tourism in Northern Kentucky,” Caradonio said. “With the Creation Museum attracting almost one million visitors since opening less than three years ago—including more than half of those visitors coming from over 250 miles away—it certainly meets the criteria we established for the award.”

The NKYCVB functions to positively impact the Northern Kentucky economy through conventions, meetings and visitor expenditures; it represents Boone, Campbell and Kenton counties. An outside consultant estimates that $60 million has been added to the regional economy by museum visitors in its first two years of operation.

The Creation Museum was founded by Answers in Genesis, a biblical apologetics ministry which conducts more than 250 teaching meetings each year, hosts an award-winning website, and produces the Answers with Ken Ham radio program heard on more than 800 stations throughout the United States. The high-tech Creation Museum opened to international acclaim on Memorial Day, 2007, and has attracted 960,000 visitors since then.