The museum received first place in the social media category for its creative and interactive social media campaign. The Creation Museum has nearly 98,000 Facebook fans (or “likes”) and logs thousands of weekly interactions.

The museum was also awarded second place honors for its television commercial spots, which showcased the exotic live animals in the outstanding petting zoo next to the museum.

Although it’s not even open yet, the new Ark Encounter project (with a full-size Noah’s Ark as its centerpiece) was also honored, being hailed for the creativity and quality of its press materials. It received a second place award for the Ark Encounter press kit. 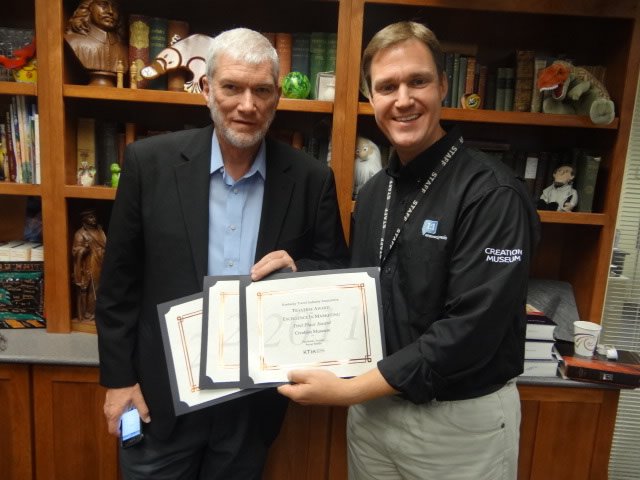 Ken Ham and Jason Goff with the three awards given to AiG recently by the KTIA.

“We are honored by the Kentucky Travel Industry Association’s recognition of our marketing efforts and for their appreciation of the Creation Museum’s contributions to state tourism,” said Ken Ham, the founder and president of the Creation Museum. “I am constantly amazed at the creativity of our staff and our ad agency, Joseph David Advertising. I am delighted they have been recognized in such a way, and that the museum is acknowledged to be at the cutting edge of today’s social media.”

Eric Rose, chairman of the KTIA, which hands out the awards, added, “We are very pleased with the excellent marketing work from the Creation Museum, and we’re glad the KTIA Traverse Award judges agreed and recognized their efforts.”

Rose, who also runs the well-known Newport Aquarium (20 minutes from the Creation Museum), continued, “The Creation Museum’s huge draw of visitors impacts not only those of us here in Northern Kentucky, but travel and tourism businesses across the Commonwealth. Since travel and tourism is Kentucky’s third largest industry, with an $11 billion economic impact, this is no small matter.”

This is the third year the Creation Museum has participated in the Traverse Awards. Two years ago, the museum won “Best in Show” honors for its striking billboard campaign that highlighted the various dinosaur exhibits inside the museum.

The Traverse Awards presentation was held October 18 during an evening gala at the Lexington (Ky.) Convention Center as part of the Kentucky Travel Industry Annual Conference. Jason Goff, the social media manager for the museum, accepted the first-place social media award at the ceremony in Lexington. The museum’s director, Dan Mangus, was also in attendance.

Traverse Awards are presented annually for the best work in advertising and marketing among Kentucky tourism businesses and marketing organizations. This year, a panel of experts in tourism marketing judged 244 entries from across the state. Each entry is judged on creativity and how well it relates to its audience.