Nothing fascinates kids and adults quite like dinosaurs! In Buddy Davis’ Dino Den at the Creation Museum, you’ll see dinosaur sculptures of all kinds and learn about their incredible design from a biblical worldview. Here are interesting facts about seven dinosaurs you will meet in the Dino Den! 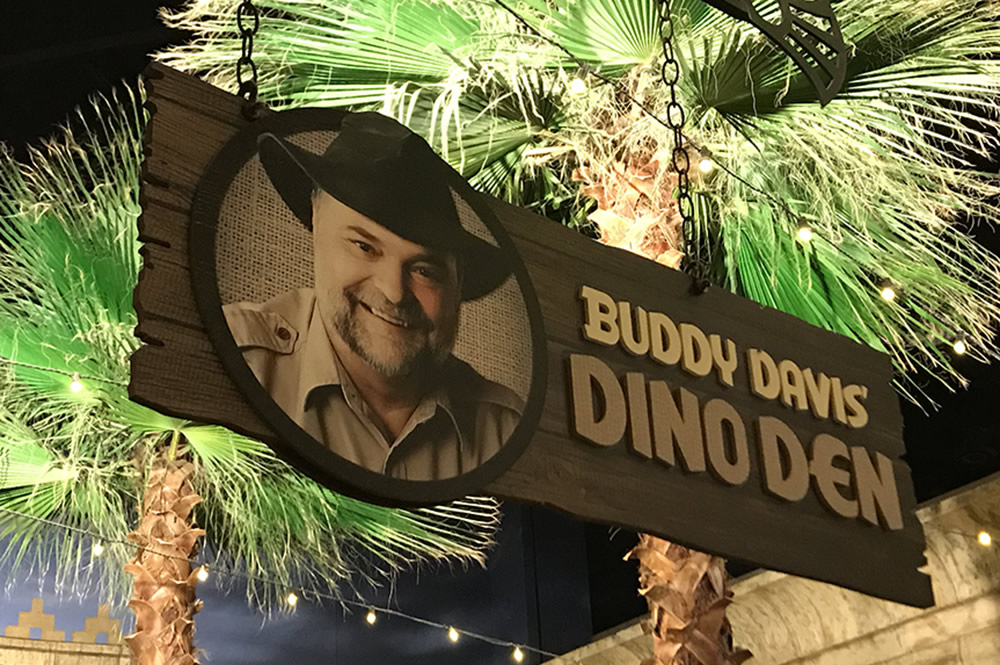 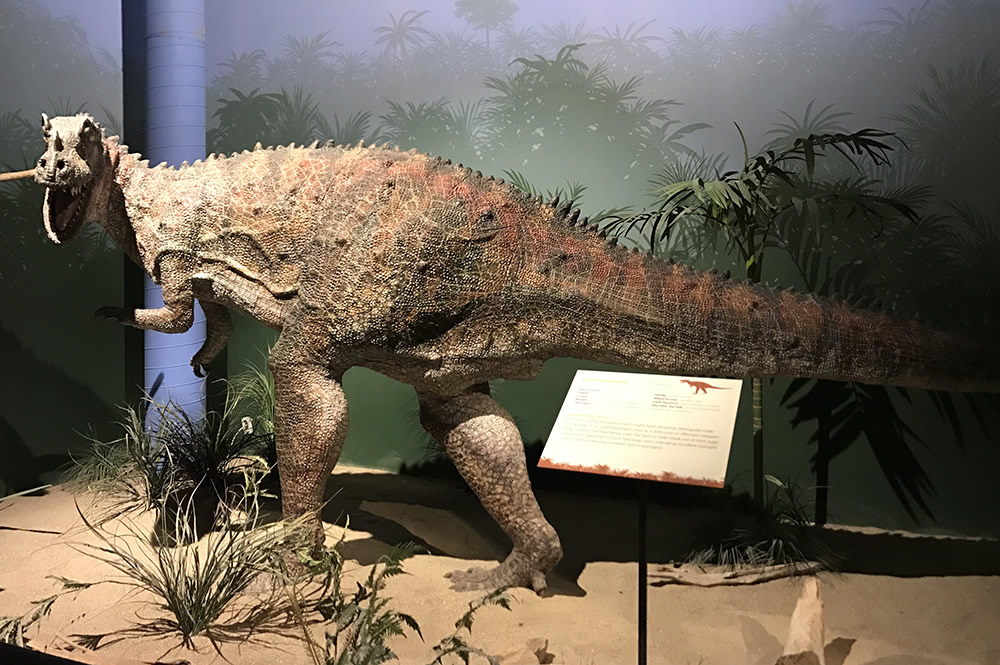 The horn on the Ceratosaurus’ snout might have served to distinguish male from female, or it could have been used as a defensive or offensive weapon. Some suggest that hatchlings used the horn to help break out of their eggs. 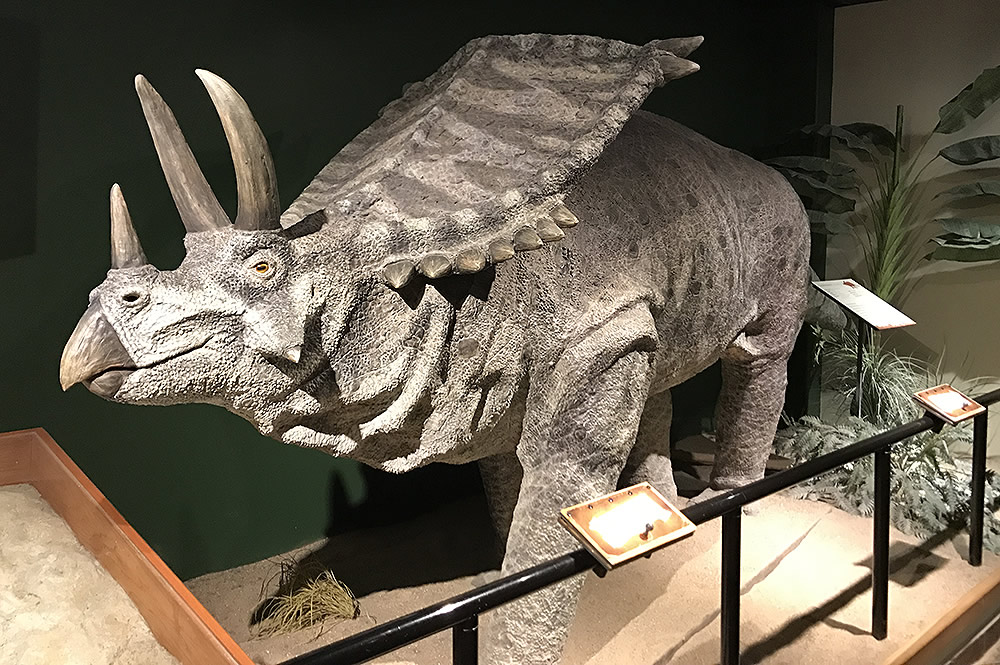 Chasmosaurs (“opening or sham lizard”) was named for the large openings found in its frill, which is the large bone section that protrudes from the top of the skull. It is one of the best-known horned dinosaurs, with many specimens. Some bone beds contained more than 100 individuals, and fossilized skin impressions of Chasmosaurus have been found. 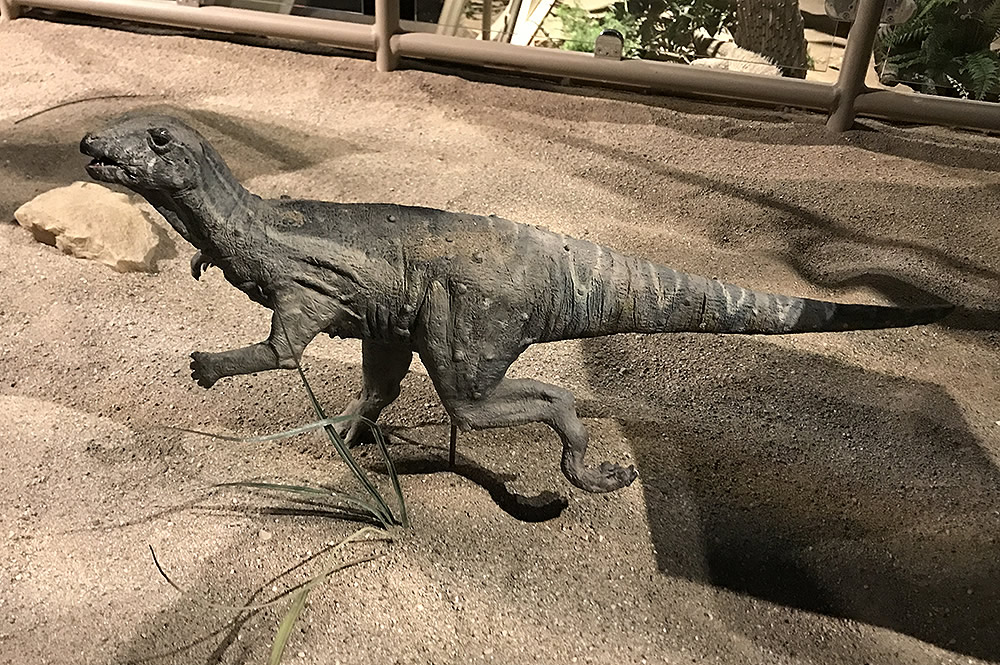 Unlike many reptiles that have only one type of tooth, Heterodontosaurus had three types of teeth. The front teeth were small and likely used for cutting off leaves and stems. The second type was a large pair of tusks that may have been used to impress a mate, and the third type of was tall and squared off and well designed for chewing. 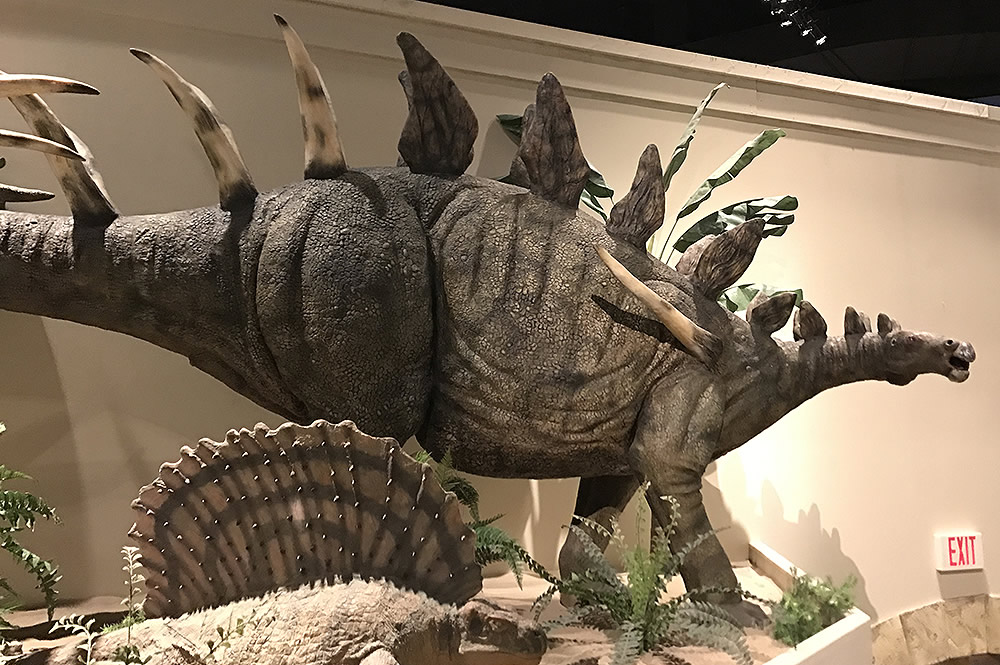 Kentrosaurus, a member of the Stegosaur family, was discovered in East Africa in 1909. Over 1,200 bones were found in the field, but many of them were destroyed during World War II. 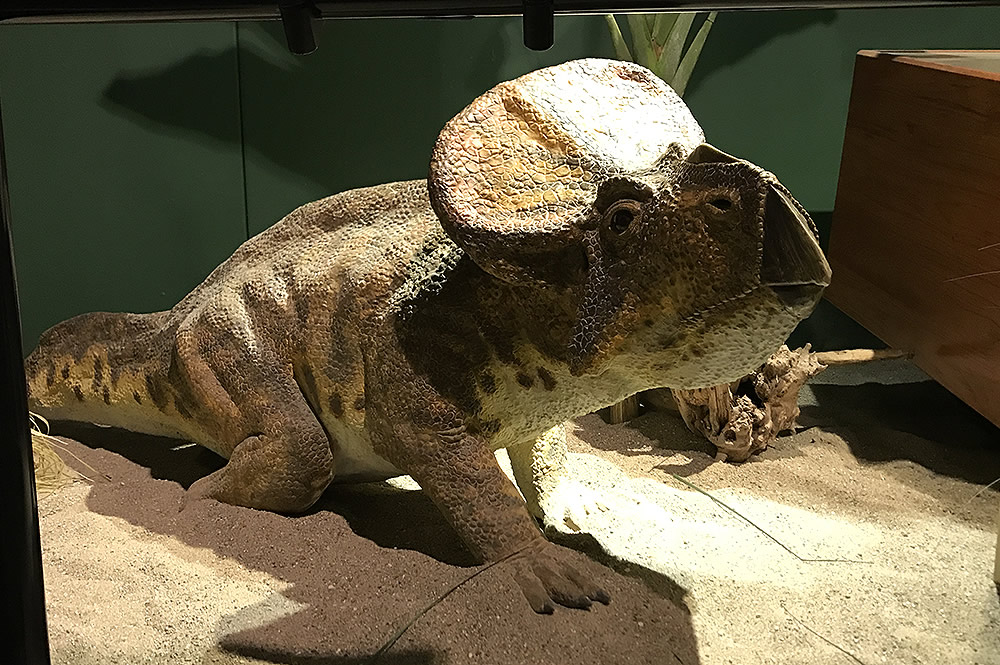 The species Protoceratops andrewski was named for its discoverer, an adventurous fossil hunter named Roy Chapman Andrews whose exploits were the basis for the movie character Indiana Jones. A famous fossil in Mongolia includes a Protoceratops and Velociraptor locked in battle, which could be preserved only if something buried the dinosaurs suddenly while in combat—perhaps something like a global Flood! 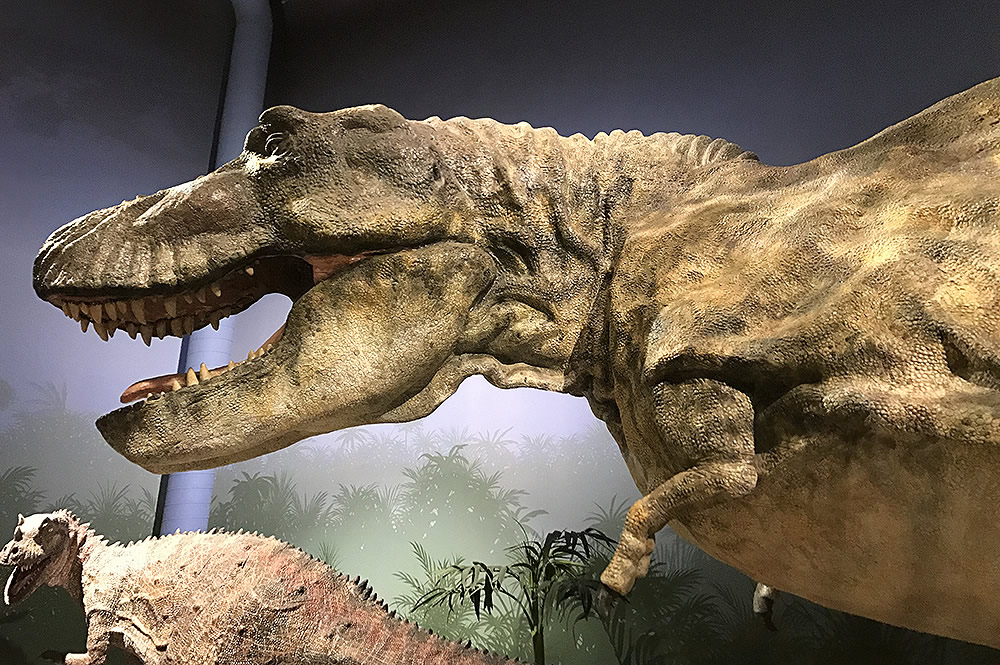 Tyrannosaurus rex is probably the most well-known dinosaur of all, having been portrayed in movies for over 60 years, including the Jurassic Park movie series. It had teeth up to 12 inches long and a skull of up to five feet long. The position of the eye sockets and narrowing of the snout indicate that it may have had binocular vision. Most believe that T. rex was an active predator, but more recent studies indicate that it may have been too slow to hunt and mostly scavenged for food. 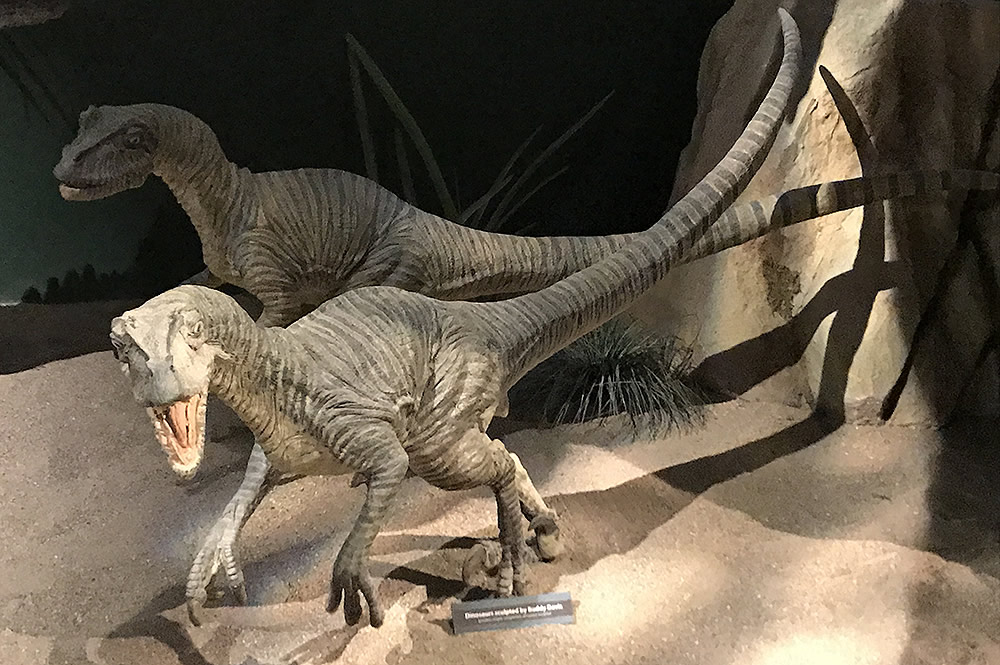 Velociraptor, which means “swift robber,” was named because it appeared to be a fast-moving dinosaur that robbed the nests of other dinosaurs. Some studies have suggested that they could run nearly 40 miles per hour for short bursts, making them a dangerous predator.

Learn About Dinosaurs from Buddy Davis

Want to learn more about dinosaurs during your visit? Buddy Davis is a speaker/songwriter and book writer/illustrator for our parent ministry, Answers in Genesis. He’s also an adventurer and paleo-artist. Learn firsthand from Buddy during his Family Dinosaur Tour or through one of his workshops or presentations. Be sure to check the events calendar before you visit to find out when these special programs are offered. 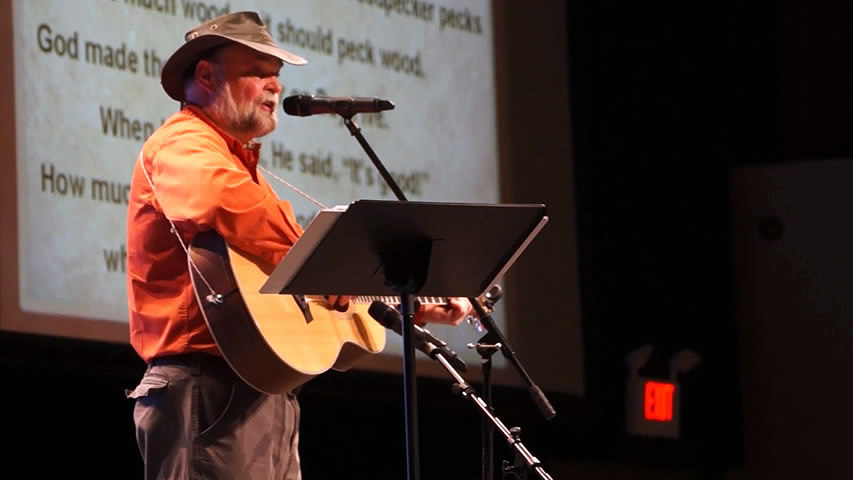 When you visit the Creation Museum, you won’t want to miss exploring Buddy Davis’ Dino Den where you can learn even more about these seven dinosaurs and others! Be sure to share your favorite pictures from the Dino Den on Facebook, Instagram, and Twitter using #creationmuseum!