[Editor’s note: This is a slightly adapted version of a news release that is being circulated to the U.S. media today.]

Creation Museum to Use Impressive Allosaur to Proclaim Genesis, not Evolution

PETERSBURG, Ky., Oct. 18, 2013 — The array of exceptional exhibits at the Creation Museum is about to see the addition of a world-class dinosaur skeleton. An impressive allosaur—recently donated to the museum located near the Cincinnati Airport—is believed to be one of the four best-preserved Allosaurus skulls ever discovered.

Allosaurs, sometimes confused with a T. rex, were large theropod dinosaurs. The museum’s new dinosaur probably stood 10-feet high and 30-feet long. It is one of many Allosaurus fossils uncovered in the Morrison Formation of North America. This allosaur is exceptional because rather than mixed and scattered as almost all the Morrison fossils are, the bones were found together, with many in their articulated position.

Ken Ham, president/founder of the Creation Museum and its parent organization Answers in Genesis, stated that this skeleton, dubbed Ebenezer, “fulfills a dream I’ve had for quite some time. For decades I’ve walked through many leading secular museums, like the Smithsonian in Washington, D.C., and have seen their impressive dinosaur skeletons, but they were used for evolution. Now we have one of that class for our museum.” 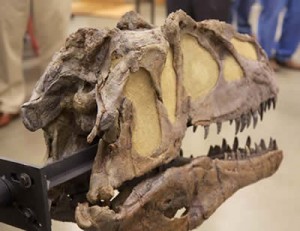 One blessing in getting the allosaur was that the Creation Museum did not seek it out. Ten years ago, the Elizabeth Streb Peroutka Foundation bought the specimen and housed it. Thousands of hours later, the bones of this magnificent fossil are almost completely cleaned and restored thanks to the DeRosa family of Creation Expeditions. Michael Peroutka, one of the board members of the Foundation, says that this fossil is a testimony to the creative power of God and also lends evidence to the truth of a worldwide catastrophic flooding of the earth about 4,500 years ago as described in the Bible. In order to assure that the display of the fossil represented this teaching, the Peroutka Foundation donated the fossil to the Creation Museum.

Dr. Andrew Snelling of AiG and the Creation Museum says the new allosaur “probably stood 10-feet high and 30-feet long. It stands out for a few major reasons. It was found with its bones arranged in their correct anatomical positions relative to each other rather than in a scattered assortment of bones as is often the case. Also, much of the spine and 97% of the skull were found. Lastly, the skull is much larger than the famous ‘Big Al’ dinosaur at the Museum of the Rockies in Montana.”

As a geologist, Dr. Snelling added that unlike the way most of the Morrison Formation bones had been found scattered and mixed, the intact skeleton of this allosaur is testimony to extremely rapid burial, which is a confirmation of the global catastrophe of a Flood a few thousand years ago.

This stunning allosaur, with teeth averaging over four inches, has 53 teeth still in place. The skull is expected to be on display by Memorial Day 2014. The museum’s talented design team has excitedly taken on the enormous task of designing an exhibit to feature this phenomenal skull and the rest of its bones. Meanwhile, the museum increased its insurance coverage by $500,000 to cover it.

The Creation Museum already has excellent dinosaur-related exhibits, including dinosaur eggs and bones plus realistic animatronic models. Also, a new dragon exhibit asks the question: “Were the many dragons of legend really dinosaurs?”

Ham added: “While evolutionists use dinosaurs more than anything to promote their worldview, especially to young students, our museum uses dinosaurs to help tell the account of history according to the Bible. This remarkable allosaur is a great addition to our dinosaur exhibits. It’s been a pleasure to work with the Peroutka Foundation, which wants to use this great fossil in a God-honoring way.”

It is expected that about half the cost of the allosaur exhibit will be funded through the museum’s “Membership with a Mission” program. The other half ($250,000) will need to be raised through donations.

This month, one of our supporting families has offered a matching gift challenge—one which will get this allosaur exhibit built and also help fund AiG’s Ark Encounter project! A few weeks ago, this family gave AiG a $500,000 gift to help build the evangelistic Ark Encounter, with a full-size Noah’s Ark.

The same family then heard of the opportunity to display a world-class dinosaur fossil inside the Creation Museum, and decided to do something else on top of its $500,000 gift: they have made a special matching gift offer. For every dollar donated to the allosaur exhibit and the general AiG ministry through November 15, this family will donate a dollar to the Ark Encounter—up to another $500,000. That would be $1 million!

Your donation today will essentially be doubled. To have your gift matched and benefit the Ark, please go to our online donation page, enter your gift amount for “Core ministry,” and then type the words “Allosaur Match/Ark Encounter” in the comments area at the bottom.

Thank you for partnering with us in this new exciting new opportunity to point people to the authority of God’s Word and its gospel message through the incredible allosaur and the future Ark.