Can you imagine a world with no sin or death? Sadly, evil and suffering are so prominent in the world that a perfect creation seems inconceivable. The Garden of Eden exhibit at the Creation Museum provides clues to some of the major differences between the world before sin and the world of today.

One of the first differences you might notice is that the animals and people are all together without fearing one another. The lamb stands right in front of the large cats, apparently not afraid of attack. Dinosaurs are all around, but they only show interest in the fruit in the garden. Originally all of God’s creatures were vegetarians, so nature was not cruel or violent. 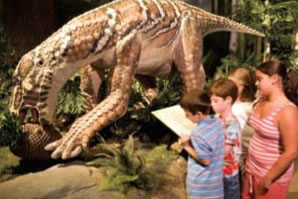 Food grows in abundance without Adam having to work the ground. Most notably, the Tree of Life stands in the middle of the Garden, full of fruit and flowers. The museum’s version of the tree is 25 feet high and up to 50 feet wide. Of course we are limited by walls and a ceiling, but the tree God planted could have been tremendous, possibly reaching throughout various parts of the Garden. Its fruit was easily accessible by Adam and Eve. We don’t know exactly how the Tree of Life worked, but we know that by eating of it, Adam and Eve would be able to live forever. Death was not inevitable for them, as it is for us.

Also, Adam and Eve are naked in the museum’s Garden of Eden. The Bible tells us that they were naked and not ashamed. Sin had not yet entered the world, so there was no need to wear clothes or to be ashamed of anything.

Obviously the Garden of Eden represents a very different world from what we see today. No predators, abundant food supply, no sin or shame, and complete peace and fellowship with God—these are a few things that we do know about the world that was lost when Adam and Eve chose to disobey God. But a symbol of the good news that was to come also stands in the Garden—a perfect white lamb. The rest of the museum shows how God provided a way out of our current condition and back to paradise through faith in Jesus Christ, the Lamb of God.