Penguins in the Garden? 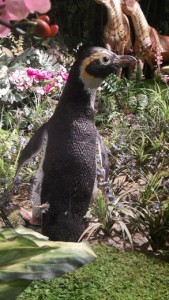 It’s a glorious scene with lush fruit trees and Adam surrounded by wonderful creatures—a sweet lamb, gentle large cats, majestic sheep with big horns, penguins—wait a minute! Penguins in the Garden of Eden? This might be a Creation Museum guest’s thoughts as they enter the Creation Walk. Why in the world are there penguins in the Garden?

Truth be told, we don’t know exactly what creatures were in the Garden of Eden. But we do know a few things about that amazing day in the Garden, the 6th day of creation. The Bible tells us that Adam named the animals, and then when no suitable companion was found for him, God made Eve to be his wife. These events unfold before your eyes as you walk along the Creation Walk.

We also know that all living things we see today are descendants of the creatures God made in those first six days of history. That means that all of the variety of life on earth today was present then; in fact, there was much more variety because many groups of organisms have since become extinct. Some of the variety may have been hidden in the animals’ genes, only to be seen in future generations. 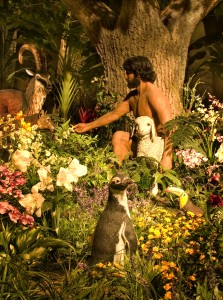 The Bible says that God created the different “kinds” of animals. The classification of “kind” is not the same as what scientists call “species.” We believe that “kinds” are probably best represented today by the classification “families.”

For example, the horse family, Equidae, includes horses, zebras, donkeys, and extinct horses. Horses and zebras can breed with each other and produce “zorses,” and donkeys and horses can breed to produce mules and hinnies. This indicates that they are probably from the same created kind. Check out the pair of beautiful horses in the Garden of Eden (pictured). They look similar to zorses, and represent our sculptor’s best guess at what the original horse kind may have looked like.

So why penguins? Well, the Bible says that Adam named the cattle, birds of the air, and beasts of the field. Penguins can’t fly, but they are fantastic swimmers. Did God create them as swimmers only, or were they originally able to fly as well, perhaps an ability which was lost in future generations? We are not sure, so we cannot know if they were in the Garden with Adam or were at sea somewhere on day six of history. The original penguins were probably able to tolerate a wide range of climates and habitats because they were adaptable enough to eventually produce the variety of penguins we have today, so they surely could have been comfortable in the Garden.

Whether or not they were actually in the Garden of Eden, the penguins’ presence in the Creation Walk makes one think, so they serve a purpose there. Hopefully they and the other creatures, like the horses and the pair of sheep with goat-like features (sheep and goats interbreed and are probably from the same created kind), will help museum guests to understand how the world at that time was very different from today—but not in the way that evolutionary ideas would predict.

Are you growing veggies in your garden this year? Caption this photo in the “Corruption Valley” area of the Creation Museum. 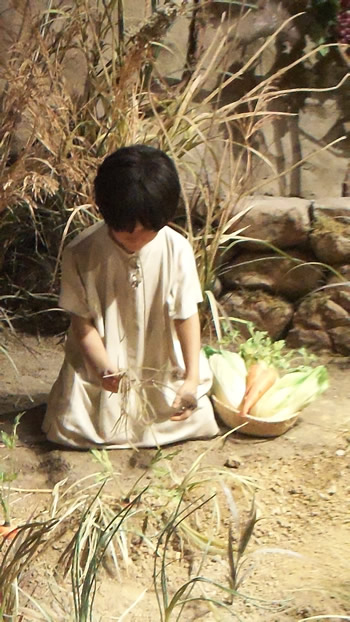