We recently opened a new exhibit that explains the history of Answers in Genesis—the ministry behind the Creation Museum.

The display depicts the vision for the museum, which began over 30 years ago, as well as our future plans, including the building of a full-size Ark in Northern Kentucky.

This special area of the museum tells the story of our ministry and also explains how our guests can share in the excitement of what God is doing at Answers in Genesis—including Outreach Events, the Ark Encounter project, and other resources.

We need a name for this exhibit, and we’d like to hear your suggestions. A couple of ideas that have been floating around here are “Promo Hall” and “Answers Hall.” Leave a comment on this blog entry or our Facebook page with your recommendation. We will have a poll on Facebook as well. [UPDATE: Thanks for your suggestions, we'll let you know the name of the new exhibit in an upcoming blog!]

We look forward to hearing your ideas!

Here’s a larger photo of the exhibit where yesterday's photo came from. 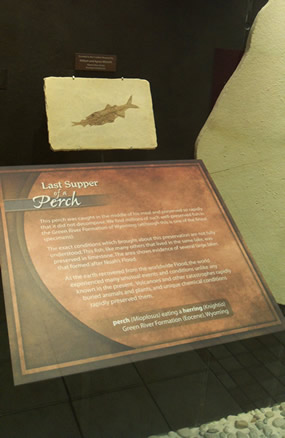 Last Supper of a Perch

This perch was caught in the middle of his meal and preserved so rapidly that it did not decompose. We find millions of such well-preserved fish in the Green River Formation of Wyoming (although this is one of the finest specimens).

The exact conditions which brought about this preservation are not fully understood. This fish, like many others that lived in the same lake, was preserved in limestone. The area shows evidence of several large lakes that formed after Noah’s Flood.

As the earth recovered from the worldwide Flood, the world experienced many unusual events and conditions unlike any known in the present. Volcanoes and other catastrophes rapidly buried animals and plants, and unique chemical conditions rapidly preserved them.