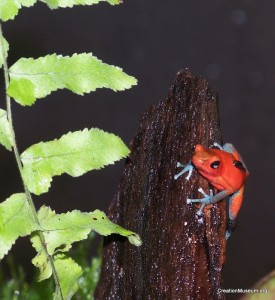 Our newest animals on display in the main hall of the Creation Museum, three strawberry poison dart frogs, Oophaga pumilio, treated some staff and guests recently to a fascinating spectacle. Momma frog was carrying a tadpole on her back! Over the last week, she was seen transporting two other tadpoles, looking for small bodies of water (usually in the leaf axils or the center cup of bromeliad plants) in which to deposit her young. Tadpoles are not placed together, which is a good thing because they are cannibalistic, so the female needs to find several suitable water holes to raise her babies. That’s right, unlike many other frogs that simply lay their eggs in water where tadpoles develop without any parental care, dart frogs are well known for caring for their young. Although the degree of care varies between species, strawberry dart frogs go further than some by feeding their tadpoles. Every few days, the female will lay unfertilized eggs, the only source of nourishment for the developing youngsters, to feed her offspring.

Strawberry dart frogs are found from Nicaragua to Panama in Central America and vary tremendously across the species range. They vary in size but especially in color and pattern. Some are blue; others are green and yellow, while others are red or orange. They can have dark spots or dashes and can have either white or colored bellies. Different varieties are often named according to the specific localities in which they are found. Our three strawberry dart frogs are known as Oophaga pumilio ‘Almirante’ and are red with grey to blue/grey legs, which is typical of the species when found near the city of Almirante, Panama. 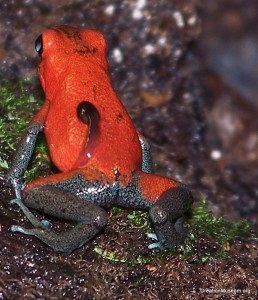 Distinguishing between male and female strawberry poison dart frogs is difficult unless courtship behavior is observed. Fat males are often mistaken for females that are full of eggs. We knew we had a male but only confirmed we had a female after seeing the pair courting. Only males call, a surprisingly loud vocalization for such a tiny frog. For weeks now, the male has been calling, which can easily be seen as he inflates his throat. The waterfall in the main hall drowns out his call, but the sound he makes can be described as insect-like, easily heard when the glass door of the exhibit is opened. A male will call to attract a female to an egg- laying site of his choosing. The female will often dance around the male and appears to give him a “back rub” of sorts as she touches his back with her front feet. This behavior continues as the male keeps calling while leading her to the egg-laying site out of the water, often on the end of a leaf, where the eggs are laid and fertilized. It’s the male’s responsibility to keep the eggs moist until they hatch into tadpoles, about 10–12 days later. After hatching, the female will carry the tadpoles, usually one at a time, as described above. 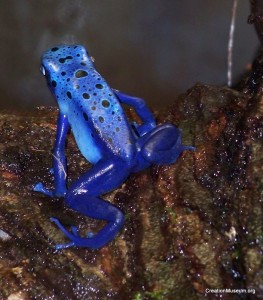 So, the next time you’re at the Creation Museum, look carefully in the poison dart frog exhibit for the tiny red strawberry dart frogs and you may be lucky enough to see the amazing parental care that God designed for these fascinating frogs. Also, keep your eye out for baby frogs (froglets) because in 6–8 weeks, we will hopefully see them emerging from the bromeliads after their metamorphosis is complete.