A Report from the Field, by Creation Museum Registrar Stephanie McDorman

I looked out my hotel room window Wednesday morning to discover that it had been raining.  Thankfully we had indoor activities on the agenda for the first half of the day, and they say the ground dries fast here in Montana, so we pressed on. 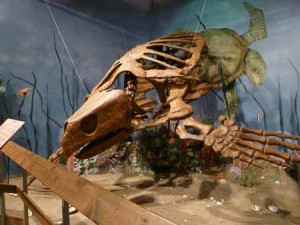 Our first stop this morning was the Glendive Dinosaur & Fossil Museum.  You can almost see the museum from the hotel, but we took the vans anyway (saving our energy for later!). 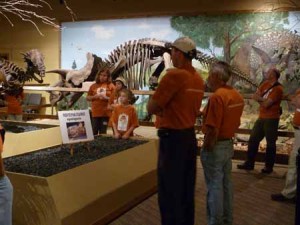 Otis Kline, Director of the museum, gave us an in-depth tour of the beautiful exhibits.  The museum is very well laid out and presents the truth of creation, problems with evolutionary thinking, the gospel message and more in a 20,000 square foot space.  The Foundation Advancing Creation Truth, who built the museum, have a powerful ministry here in the heart of dinosaur country. 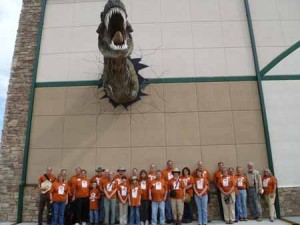 Group shot outside the museum. 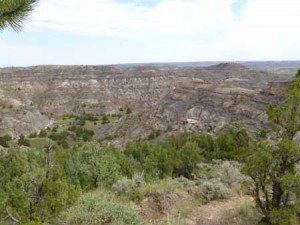 One view from Makoshika State Park.

Our next stop was Makoshika State Park, the largest state park in Montana.  We drove to the top of a ridge and looked out over the beautiful “cake layers” (as Otis calls them) that were laid down then dramatically eroded as a result of the Flood and the run-off.  As Otis said, “most of what you see is not there.”  In other words, we saw the results of the removal of vast amounts of sedimentary layers.  What was left behind is truly a sight to see, so this was a highlight of the day! 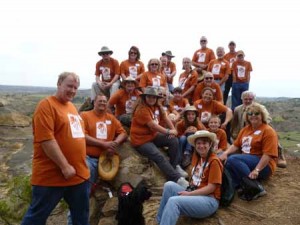 Almost the whole group (not everyone wanted to go out here just for a picture!)

We then loaded back into the vans and headed for our first look at the dig site!  We enjoyed a boxed lunch at the shelter near the dig site, then had “school.”  Otis and his assistants, Vance and Jordan, let us choose rocks out of boxes, to see if we knew how to identify bones based on what we had seen at the museum. After picking through the boxes and learning what real fossils look like, we started hiking up the hills to the dig site.  They are right; the ground does dry fast here, and there was no longer any sign that it had rained.  That was good because the bentonite in the dirt is like grease when it’s wet! 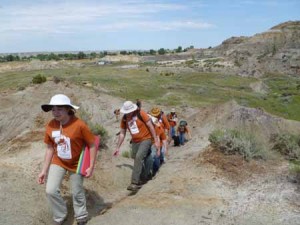 On the way to the dig site. No, it’s not a chain gang. Really.

Soon we arrived and were issued our sophisticated digging tools—a blade screwdriver and a paint brush!  We’re digging in the Hell Creek Formation, which is famous for dinosaur bones.  Otis showed us what to do, and we each took a station along the wall of dirt.  Every 30 minutes or so, we shifted to the left so that everyone would have more of a chance of actually working on bones.  Three or four bones were already exposed from the previous dig, so some people set to work right away, chipping off the surrounding material and exposing more of the bones. 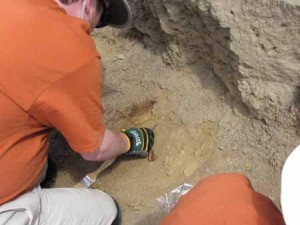 J.D. found the first new fossil of the day!

Whenever one of us found something we thought was different from the dirt and gravel, we would call Otis, Buddy, Vance or Jordan over for a look.  Soon we were frequently hearing, “is this something?”  Many people found fossils today—turtle bones, dinosaur bones, figs, and petrified wood, and we were only working for a couple of hours!  Who knows what we’ll find tomorrow when we have the whole day! 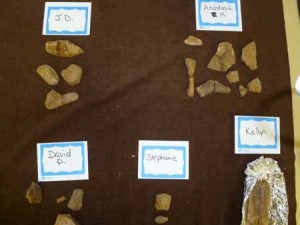 After digging, we headed back to the hotel.  We had a little over an hour before dinner, so everyone had the chance to take a shower and rest a little.  Soon we were enjoying a delicious meal of salmon, wild rice, carrots, and more, with a fabulous raspberry chocolate mousse for dessert.  After dinner, Buddy led us in a couple of songs and showed us how he makes his dinosaurs (it didn’t happen by chance, you know). 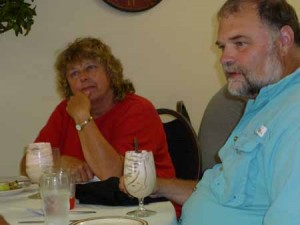 It looks like Buddy enjoyed the mousse. It was yummy! 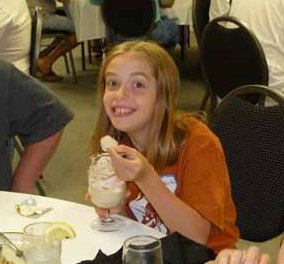 We made lots of memories today, and the fun continues Thursday!  We are thankful for the unexpectedly gorgeous weather—low 80’s and a slight breeze—maybe that will continue too!  (Now if you sign up for a dinosaur dig in July in Montana, don’t expect such perfect weather. It could have just as easily been over 100 degrees!  In fact yesterday a sign we drove by said 100 degrees.)