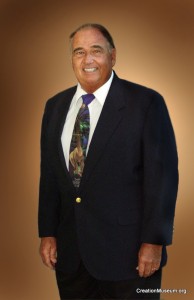 Once again Dr. Gary Parker will be coming to the Creation Museum.  Over the past couple years Museum guests have been fortunate to hear from this Creationist pioneer, and 2010 is no exception.

Dr. Parker will be speaking for the Museum's Answers Speaker Series for two days in July.  On Wednesday, July 21 he will  explore the question of when life begins.  Can scientists tell when human life begins?  Does a baby before birth go through stages of animal evolution?  Are our bodies filled with useless leftovers (vestiges) of our evolutionary ancestry?  What has science discovered about life before birth that David (Psalm 139) knew 3000 years ago?  Find the answers to these questions and more in Life Before Birth at 12:00.  It will be followed by Hunting for Fossils at 3:00.   This presentation will take you along on the Parkers' expeditions looking for fossils of fascinating sea creatures within a couple of hours drive from the Creation Museum!  Learn what they found, how and where they found it, and how each fossil can be used as a “missionary” to spread the gospel!

On Thursday, July 22, Dr. Parker will present Christian Ecology at 12:00.  There you will learn to separate fact from fiction about subjects such as carbon dioxide, polar bears, and “global warming.”  Learn why koalas and kangaroos live in Australia; how predators originated, and how population is regulated without them; what is endangering endangered species; and the role God has for His “stewards of creation” in a fallen world.  At 3:00 his talk is entitled Viruses and Immunity.  This fascinating presentation will answer the question of why, if our Creator is a God of love and power, we have viruses and other “germs”?  How does the immune system fight viruses and other diseases, while some diseases get past it? Where did immunity fit in God’s original plan?

Biologist Dr. Gary Parker—along with his wife, Mary—was with Answers in Genesis as a senior lecturer since AiG’s first year (1994, and remained full-time until 1999). Dr. Parker began his teaching career as a non-Christian and evolutionist.  He has published biology textbooks and books on creation science, appeared in numerous films and television programs, and lectured worldwide on creation.  Dr. Parker is originally from Arcadia, Florida, where he again resides, and runs a museum.  The Creation Adventure Museum features many hands on activities and field trips, fossil hunting, and offers a course for college credit. Many of Florida's fabulous fossils can be found in abundance right in the Peace River area where the Museum is located.  Mark your calendar now so you don't miss these fascinating presentations on July 21 and 22, 2010.