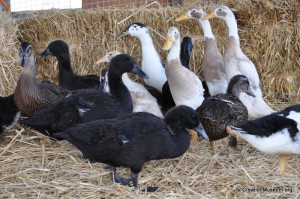 Spring is “just ducky” at the petting zoo

Waddle on over to the petting zoo to see our 17 young ducks!  They arrived April 23rd at just three days old. Chicks are sent the first day they hatch because they survive for 3 days on the yolk from the egg before they need to start eating.  It’s the perfect time for traveling to a new home! 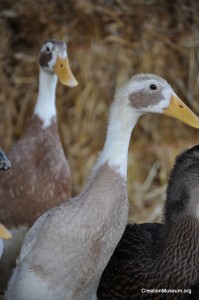 We now have four varieties of domestic ducks.

Roens, which are a domestic variety of Mallards bred for their tasty breast meat, get about three times the sizes of wild mallards.  We did not get them for eating, though—aren’t they “lucky ducks?’

Indian Runner ducks have a very upright stance. They do not waddle like most ducks but walk more like penguins. Runners come in several colors and are bred mostly for egg production—one duck lays about 365 a eggs a year.

Magpies are mottled, usually white and black, but other colors do exist. The magpie may be related to the running duck, but it is considered much rarer. Some people have even placed it on the "endangered breeds" list. Magpies lay 220-300 eggs a year.

Cayuga ducks are an ornamental and meat bird named for the region of New York where the breed first became popular. This breed is considered threatened by the American Livestock Breeds Conservancy. Cayuga ducklings keep their same color through adulthood. They sport solid black from bill to webbed feet, and when the sun hits them just right, they take on an emerald green shine like a Japanese beetle. 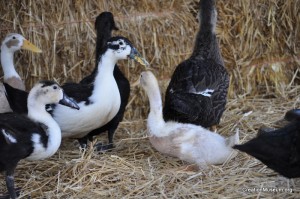 More chicks on the way—pea chicks!

Although peacocks do not lay eggs, they also do not give live birth. Instead the pea hens lay eggs (peacocks are males).  One of our pea hens is currently sitting on a nest of at least six eggs!  Incubation usually lasts about 26 days. Peachicks will begin to fly efficiently in just 10-15 days.

We recently acquired a white peacock and peahen.  They are not albinos, just a lovely white variation of the peacock.