Hola, from the Petting Zoo!

We are pleased to introduce two new additions from Critterden Acres Palpacas in Crittenden, Kentucky: Yankee and Alfanso, our new alpacas! If you’re wondering what alpacas are, they are camelids, related to llamas, vicuñas, guanacos, and camels. They have very thick, fluffy wool, and long necks, just like llamas and their wild cousins the vicuñas and guanacos. Many people confuse llamas and alpacas, and in fact, for a long time, people thought alpacas were selectively bred from llamas. Recent DNA studies, however, have shown that llamas were domesticated from guanacos, but alpacas were domesticated from vicuñas. Alpacas are generally 1 to 2 feet (30–60 cm) shorter than llamas and are used primarily for their wool, whereas llamas are generally used as beasts of burden. Another distinguishing characteristic is their ears—llamas have curved, banana-shaped ears, while alpacas have straight ears. 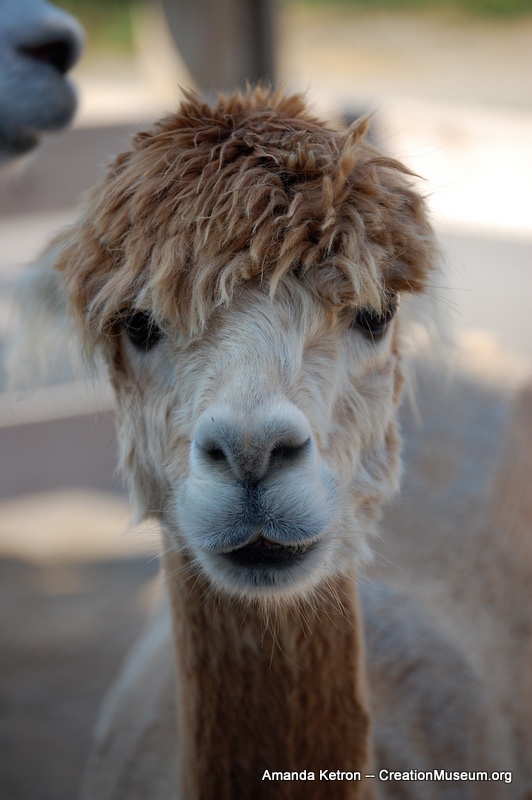 Alpacas can live for about 20 years and typically have only one baby, or cria, at a time. They prefer living in herds and are most comfortable in cooler climates like those of the Andes Mountains in South America, their native home. Alpacas come in dozens of different colors and a wide array of patterns. Yankee is very similar in appearance to a vicuña, sporting a soft, earthy tan color on top, and a cream-colored underbelly below. 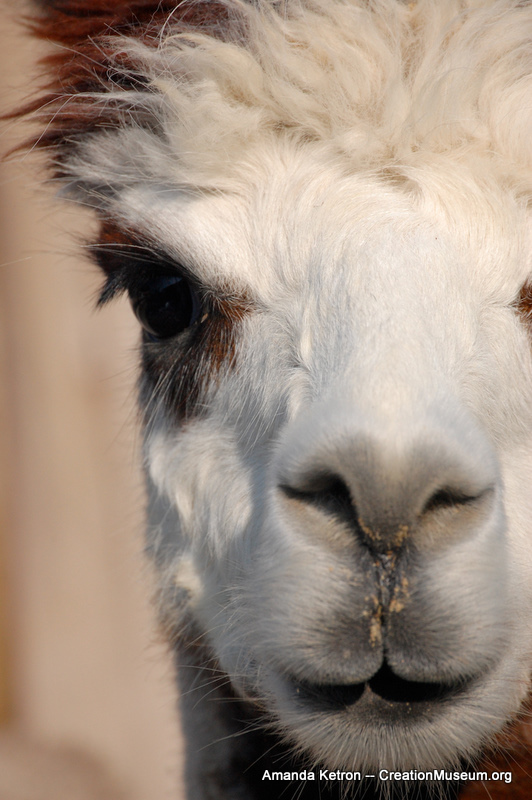 Alfanso has an interesting potpourri of colors that appear gray from far away. As you approach him, however, you’ll find that he’s actually cloaked in a patchwork of various shades of brown, white, gray, and black. Another interesting fact about alpacas is that their wool is hypoallergenic because their hair lacks natural lanolin, a wax-like waterproofing agent found in sheep wool.

You’ll notice the fluffy white one in the picture—his name is Rico. He is a hybrid of a male alpaca and female llama, commonly known as a huarizo (pronounced wahr-EE-so). Because camelids can interbreed we know that they belong to the same "kind." You can even mix a camel and a llama to make a cama! You may know that some hybrids, like mules, zorses, and zonkeys are almost always sterile (that is, they cannot produce offspring) because each equine species has a different number of chromosomes. Camelids, on the other hand, all have the same number of chromosomes so camas and huarizos like Rico are fertile.

Something we hear often at the zoo when people see them is, "Watch out! They spit!" Indeed, alpacas and huarizos can spit, but ours generally reserve that behavior for each other. Something you may not realize is that the substance camelids expel when they spit is not actually saliva. Just like true ruminants, camelids chew their cud and the sputum is actually projectile vomit! Yuck! Thankfully, our newbies are quite friendly and haven't spit on any people (yet).

Rico, Alfanso, and Yankee look forward to your visit, and we’ll be happy to try to answer any questions while you are here! Adios!