The Rain Is Still Coming

The Creation Museum’s live drama Let the Rain Come will be back for two performances on August 6 and 13. Your entire family will enjoy the thrills of this fun family sing-a-long musical, which premiered last summer during our anniversary Creation Celebration and was enjoyed by thousands of guests during its inaugural summer run.

Let the Rain Come is Christ-honoring family entertainment at its finest. The musical adventures of Noah and his wife make for an engaging and energetic musical comedy packed solid with teaching from Answers in Genesis. See the account of Noah and the Ark portrayed in a way you’ve never seen before as you sing along to new songs and familiar favorites from Buddy Davis.

Utilizing the Creation Museum’s Special Effects Theater, your entire family will gain understanding and catch a glimpse of Noah’s incredible journey--from his obedience in building the Ark to the reality of a global flood. Children might even be asked to come on stage and help with a few songs! Noah and Mrs. Noah will take you on a journey filled with lots of fun and surprises. 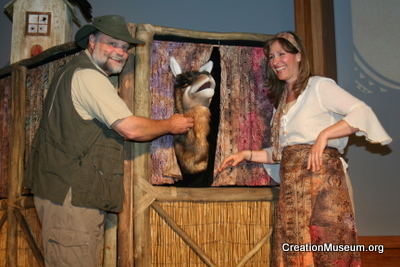 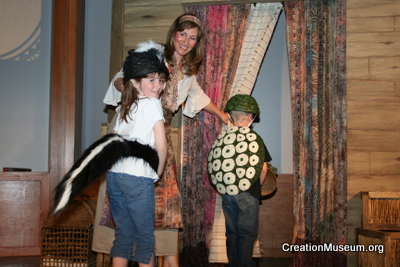 "Noah" is played by lovable and multitalented singer/songwriter Buddy Davis, whose songs you’ll be singing with your children for years to come. The presentation was co-written by author and actress Geri Campbell, whose work "The Story of Gomer" was the first ever theater presentation to be featured at the Creation Museum. Geri Campbell plays the role of "Mrs. Noah."

The performances will take place August 6 and 13. UPDATE: The shows will now take place at 3:00, so come early to get a good seat! Tickets are just $2 per person with a maximum of $10 per family.