You may remember reading about a young museum visitor last January on Ken Ham's blog.

The Creation Museum is not lost on the really young. My 2-year-old son Elijah visited the museum in July (along with the rest of the family). Months later, he has decided that he should pretend that he is going to the Creation Museum. He lines up his dinosaurs, hands out tickets to us, and tells us all their names. Our little boy (having not been to the museum in many months) describes details of the museum—the brachiosaurus in the lobby that moves his head “like this” (as our son demonstrates with his hand) and the planatarium where our “seats went back to look at the stars on the ceiling.”

Recently Elijah was able to visit the Creation Museum again. Now nearly four he still "loves creation and especially all the kinds of dinosaurs God made." His sister also came with the family this time, and they both enjoyed their time. In fact he was curious about one of our dinosaurs and asked what type it was. Well the staff member he asked didn't have the answer on hand, but after asking around we discovered the answer. One of the artists that worked on this area of the Museum supplied the answer he was looking for:

The dinosaur is in the Hadrosaur family (duck-billed dino) This species is a young Maiasaura. 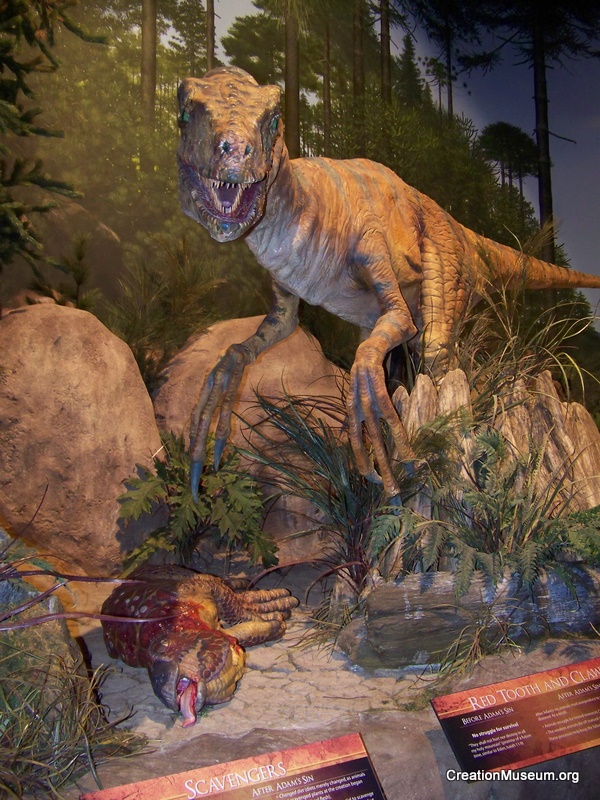 These dinosaurs are in the Museum's Corruption Valley, an area illustrating the effects of sin upon the world. The large dinosaur is a Utahraptor, one of several that appear in the Creation Museum, but the smaller one is the one that Elijah said was his "favorite part of the Museum."

It is such a joy to see young guests like Elijah enjoying the Museum so much. Come visit the Creation Museum and bring your children. We have several children's programs scheduled at the Museum, so visit our Events Calendar to see what is happening when you are able to visit.