We’re not expecting crime-fighting turtles or altered humans with super powers. Real-life mutations are not usually so convenient in the real world, but they can provide an advantage in special situations. As part of the upcoming natural selection exhibit, we will feature some famous mutants from a very specialized environment—blind cavefish.

The Mexican tetra is normally sighted in its surface-dwelling form. However, in the total darkness of caves, the same species of fish has lost what it does not need—its eyes. It has also lost its pigmentation, so it appears pinkish because of the blood vessels under the colorless skin.

In the natural selection exhibit, the fish will inhabit a cave-like aquarium. They can navigate around the stalagmites in the exhibit easily using a sensitive lateral line system that senses the slightest change in water pressure. In fact, people who keep blind cavefish have observed that they are quite capable of finding their food, often beating their sighted tank-mates to the kibble. 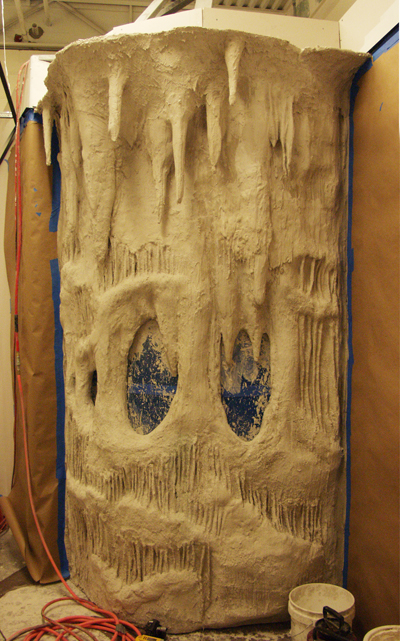 The Natural Selection Exhibit is currently under construction. This cave setting will soon be home to the blind cavefish display.

This new exhibit, opening in mid-March, uses the fish and other examples of natural selection (such as antibiotic-resistant bacteria) to illustrate the important differences between natural selection and molecules-to-man evolution.