The Kindness of Strangers

Do not forget to entertain strangers Hebrews 13:2a

Recently, a husband and wife team on our guest services staff, Bonnie and Charlie, did something we feel deserves special recognition. Not only did they go above and beyond the call of duty in their level of customer service to one of our Museum guests, but they also did something that is an example of the impact living out the Word of God can have on others.

The following story is a letter written by a woman from London who traveled by herself specifically to see the Creation Museum. Charlie and Bonnie took the time to talk with this guest, and finding out she was alone in our country, used their day off from the Museum to spend the day with her. What an example of the Lord showing His love through common every day people. 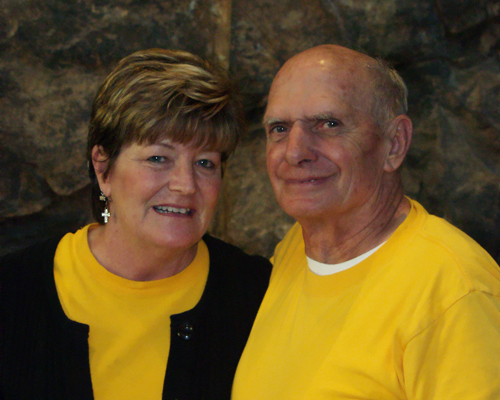 "The story begins...I attended a Ken Ham conference in London earlier this year and he put up on the screen a picture of the Creation Museum, as I saw it I just wanted to be able to come and feed on God's word and creation being shown in truth (I had always enjoyed museums until the revelation by God's grace of the lie of evolution).

The reason I knew that The Lord had put this desire on my heart was that I had never ever wanted to come to America (SORRY!), but now I couldn't stop thinking about it and prayed asking the Lord to enable me to do so. I then proceeded to make the flight arrangements and hotel booking, all I knew from the information was that the museum was off route 275 Ohio/Kentucky border. The travel agent booked me into a nice motel in Cincinnati.......Yes Cincinnati the wrong side (of the Ohio River) of where I really wanted to be, Oh but what a blessing,for God uses all things together for good to those who love Him and are called by His name.

I arrived late Thursday night went down to the reception quite early Friday morning to find out how I could get to the museum, bus routes etc, to be told that the only two buses in that area had already departed, so I called a cab to take me downtown into Cincinnati enabling me to take a bus, then pick up another cab to bring me to the museum.

As I stepped out of the cab I was greeted by Charlie, I really don't know how to thank God for His goodness to me, I just felt so excited that I was truly there, I felt, so excited (and still do when I reflect on it), I think I said 'I can't believe it I'm really here' I know I just felt like bounding up and down like an excited child, I am passed my youth by the way.

Charlie asked me where I was from and when I told him I had just arrived from London purely to see the museum, I now know that he was as blown away as I was.

He then explained where to go and I was just buzzing with excitement whilst waiting in line, asking the Lord to cover my expenses, this was because being the 'wrong 'side of the border had incurred cab travel , and praising Him for His goodness when Charlie appeared at my side with his lovely smile, to ask me to see the gentleman, who would point me to Bonnie who had a pass for me!!

Oh this caused, and still causes me to weep at God's goodness to me, you see this was the Lord saying to me that He was covering my being in America, even though I had booked technically into the wrong place. Hallelujah. I had the most wonderful couple of hours walking around the Museum and the Planetarium show was just amazing.

I then meet Bonnie again later, as I was leaving, what a lovely sister in the Lord,who offers her phone number to me, offering to come to take me out on their day off, What a generous spirit this couple have in Jesus, The arrangements were then made, they picked me up we had the most lovely steak meal, sharing testimony and fellowship whilst dining, then went back to my motel where we shared worship and fellowship in the Lord's supper, before they then went home."

Sometimes we get so caught up in the debate between evolution and creation, rocks and fossils that we don’t see another kind of “proof” there is a God. Perhaps this is what John is writing about in 1 John 4:12 when he says ,“No one has ever seen God; but if we love each other, God lives in us and his love is made complete in us.” There has got to be something outside our human selves that can love and welcome a stranger the way our two Museum employees welcomed this guest into their lives and hearts. Every time we see an action like this, we see God in action, and that is what sets this Museum apart.

Thank you, Bonnie and Charlie, for being an example of Christ’s love.