If Dinosaurs Could Talk ...

An animated T. rex will appear in the museum lobby, side-by-side with children.

If only dinosaurs could speak.

Held hostage for nearly two-hundred years by the enemies of God, several dinosaurs are now free to set the record straight. No more lies. No more false testimony. No more propaganda.

Combining the “magic” of modern technology and the truth of God’s Word, AiG’s Creation Museum has discovered the secret to bringing dinosaurs “back to life.” A sauropod, a T. rex, a dinosaur raptor, a triceratops—these are just a few of the dinosaurs that you’ll meet in the completed museum.

Their “sworn testimony” will astound the world.

The truth-telling begins in the lobby, where guests come face to face with a pair of young T. rex dinosaurs, living alongside Adam’s children.

The first room in the Creation Museum will show paleontologists digging up a dinosaur raptor.

Animated young T. rexes in the lobby: “Of course we lived at the same time as humans! God made dinosaurs on the same day as Adam. And later we drank from the same waters as Adam’s children.”

In the next room, guests will discover more truths. This time, they hear from a fossilized dinosaur raptor, still half-buried in a dig site.

Dinosaur raptor fossil in a dig site: “I lived about 4,500 years ago. How do I know? Well, fossils don’t come with birth certificates, but we can read an eyewitness account from someone who was there—the Creator Himself. In God’s Word, the History Book of the Universe, we read about a global Flood that buried all the living things on Earth.”

In the next room, guests learn how the “facts” get distorted by museums and school textbooks. 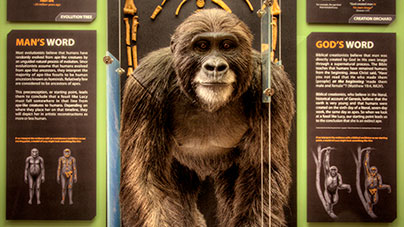 Lucy is the poster girl of human evolution, presented in other museums as a member of the same line from which modern humans arose. See how the Creation Museum has presented her from a biblical starting point. This high-tech exhibit uses holograms to give an inside look into Lucy’s anatomy.

Animated dinosaur raptor in a room on worldviews: “Don’t believe everything you see. Dinosaurs did not turn into birds! That’s a tall tale, with no foundation in reality! The Age of Dinosaurs, millions of years ago, was concocted to promote a belief that life arose without God. It makes more sense to believe God’s account in Genesis 1, which says that He made every kind of bird before He made the land animals.”

Later, the museum takes guests back in time, to the Creation Room. Guests learn how God created the incredible variety within the original DNA of each kind of animal. This variety is God’s original design, not evolution. Dogs always produce dogs, and each kind of dinosaur always produces its own kind (not birds).

Ceratopsian (horned dinosaur) family portrait in a room on the six days of creation: “Yep, that’s my great-great-grandfather, who lived about 6,000 years ago. God created him on Day 6, along with all the other land animals (Genesis 1:25). Don’t you see the family resemblance?”

Next, the museum’s guests see how Adam named various animal kinds in such a short time.

In the Creation Room of the museum, we’ll show how God created the dinosaur kinds with incredible diversity within their original DNA.

Menagerie of dinosaurs in the Garden of Eden: “Yes, sir! When Adam named all the beasts of the field, it was easy for him to name the dinosaur families, too. There are probably only about sixty actual kinds.”

Most people think that T. rex has always been a meat eater. At the Creation Museum, guests will learn the truth about his original diet.

As a result of Adam’s sin, the terror of T. rex was unleashed on the world.

An adult T. rex let loose in Corruption Valley: “Look, don’t blame God for my ferocious appetite. God originally made us to eat plants (Genesis 1:30), but Adam’s sin brought a curse upon the whole world.”

Were dinosaurs on Noah’s Ark? Guests will discover the answer from dinosaurs who were there.

Dinosaur “kinds” loaded onto Noah’s Ark: “It’s easy to explain how we fit on the Ark. It was the size of an ocean liner and the average size of dinosaurs were the size of sheep. Even the few big guys were most likely young adults (of average dinosaur size) when they boarded the Ark.”

After the Flood, guests learn the common-sense reason that we find all these fossils in rock layers all over the Earth.

“Living” fossils in the post-Flood room: “Just how did dinosaurs die? Skeptics are open to every wild idea, except the possibility of a global Flood. If you have an open mind, you can see the evidence all around you: billions of dead things buried in rock layers laid down by water all over the earth.” 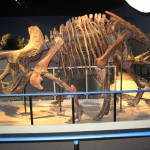 The latest addition to the museum’s menagerie of dinosaurs—a cast of a full-size triceratops skeleton, ready for action.

Triceratops in the bookstore: “What’s my story? You’ll find out as soon as AiG’s Creation Museum is completed!”

“Why are there so many dinosaurs in the Creation Museum? They’re at the center stage of the debate about the age of the Earth and the authority of the Bible. Our generation has been brainwashed with stories about dinosaurs who died 65 million years ago.” Yet most people don’t realize that this is just a façade to keep them from trusting the history upon which the gospel is based.

Christians need to be able to defend their faith in front of a doubting generation. The museum will show how, if you accept the Bible’s history, every “mystery” about the origin of the universe and the Earth—including dinosaurs—makes sense.

“Our hope is that people will walk away from the museum knowing that the Bible’s history is true,” says Ken Ham, president of Answers in Genesis. Then they’ll be ready to take the next step and say to themselves, “If the history is true, then maybe I can believe the rest of the Book—including the gospel.”