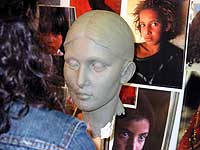 Can you guess whom this sculpture will eventually represent in the Creation Museum?

Here’s a hint: The sculpture represents a woman. Need a lifeline to help figure it out? She will be part of a scene depicting the days of Noah (see Matthew 24:37-38 before the Flood.

Hopefully by now you have guessed it—she’s a bride in a marriage ceremony! Sculpted by our newest addition to the Museum Team, Carolyn, the clay head will now be converted into a mold that we can use for future castings, making the original clay available for more sculptures.

Why a marriage scene before the Flood, you ask? The pre-Flood world is popularly portrayed as incredibly violent (see Genesis 6:11), but Jesus said that they were eating and drinking, marrying and giving in marriage (Matthew 24:38). In other words, the antediluvian people did not realize just how wicked they were in God’s eyes. The Creation Museum wants to challenge our guests with the realization that the people of Noah’s day, who were under God’s severe judgment, were much like the people of our day.

We want guests, epecially non-Christians, to recognize that God holds them accountable for their lives and beliefs, and the coming Judgment is just as sure as the historical judgment in Noah’s day. It’s all a part of the museums primary goal—to challenge both nonbelievers and Christians to forsake their own pride and self-will, and submit to God’s authority. 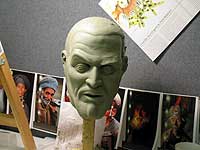 Sculpture of a blacksmith’s head

Carolyn and Brad (lead sculptor) have been busy creating some of the heads for the many life-sized figures that will be used in the museum. Brad is working on two blacksmiths who will also be featured in the portrayal of the days of Noah.

We are so excited to see the first faces to go into the museum, even if they don’t have bodies yet!