Construction at the Creation Museum didn't stop when we opened the doors to the public in May 2007. Tens of thousands of square feet have been added to the building, including expansion of Noah's Cafe, the building of the Dinosaur Den, the development of our Lakeside Grill, and more recently our new 900-seat multi-purpose auditorium, Legacy Hall (which will be opening soon).

From the exterior of the museum, the most visible addition to the Creation Museum is the building of an observatory, which will house several high-powered telescopes. The roof will slide from one side to the other, allowing stargazers to enjoy impressive views of the cosmos. Much progress has been made in the building of the observatory since ground was broken just a few weeks ago. Here's an updated photo showing the building now under construction as well as rendering of what the structure should look like when it opens in September (Lord willing).

The second dinosaur dig with Buddy Davis is underway in Glendive, Montana. Yesterday the team met with Otis Kline, who is the director of the Glendive Dinosaur and Fossil Museum. 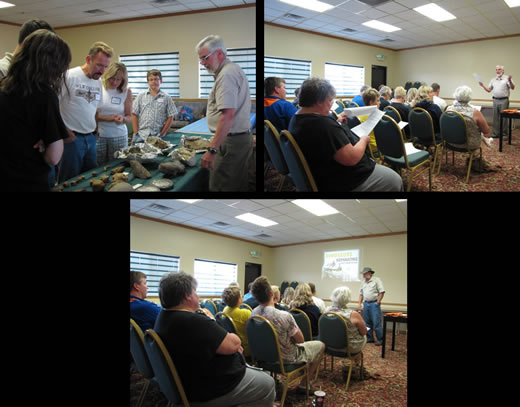 Buddy reports on his Facebook page that the weather is looking good this morning and the team will be hiking up the bluff to the dig sites. The team will be learning how to remove the dinosaur bones from the site. Be sure to check our blog for updates about the dig throughout the week! 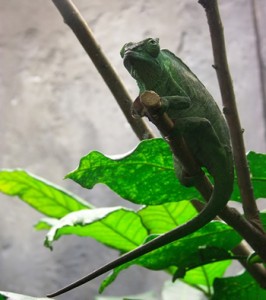 Yesterday's photo was of one of the colorful chameleons in the Main Hall of the Creation Museum.

Here are some facts about this amazing creature that God created on Day 6:

The chameleon has the unique ability to move each eye in a different direction at the same time. It is designed with a very long and sticky tongue (some being longer than the entire length of its body). This tongue allows the chameleon to capture its food even from long distances. The shape of the chameleon is specially designed for its life in trees. With its coloration and shape, the chameleon can be mistaken for a leaf or branch.

The chameleon is distinctly different from other lizards. It has hands and feet that are able to grip objects. It also has a tail that can be used as a fifth limb.

The chameleon has a horn or crest on its head, while other lizards do not.

The chameleon can rapidly change its color for both camouflage and as an “emotion” indicator.

The body of the chameleon is almost entirely flat.

Read more about chameleons on this Answers magazine article!

Today's photo is a depiction of St. George slaying the dragon. We'll have more about this sculpture that's located in our Dragon Hall Bookstore in tomorrow's blog. We look forward to reading your captions! 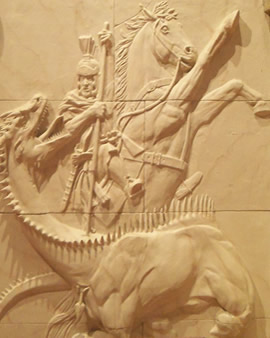